A Primer on Spectral Geometry

The Notion of spectrum is an essential part in various fields including classical mechanics, quantum mechanics, analysis, and of course, geometry that we’d discuss more here. Both quantum physics and general relativity also try to drive through the spectral approach - Can one hear the shape of the universe?

I am in no way a mathematician and my knowledge on this topic is very limited. I would like present this as an introduction and from a computer scientist’s persepective. I aim to discuss if these ideas can be extended to shape analysis applications like correspondence matching, style transfer and interpolation. This post will be a primer to a follow up article on …..

Let’s start with the basic idea of a (Riemannian) manifold and the Laplace-Beltrami operator.

Flat earthers are right. The surface of the earth is a 2D manifold. Every region around it looks like a region of the Euclidean plane. 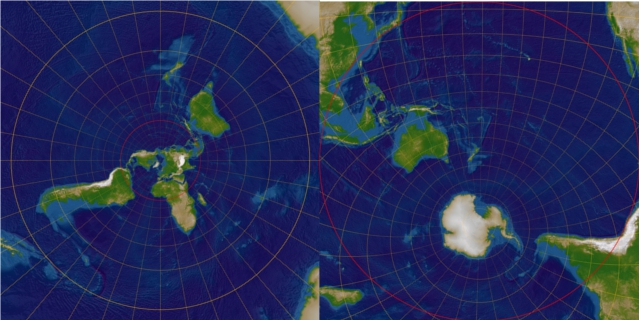 In computer vision, the notion a manifold is used quite frequently – in rotation averaging (\(SO3\)), structure and motion (“Essential” manifold), to capture the shape of an object (“Shape” manifolds), to model a set of images (“Grassman” manifolds) or to simply represent a sphere (\(S^n\)).

A “Hilbert” space is an abstract vector space with an inner product which has to be complete under convergence (i.e. to allow calculus to be used). This generalises the notion of Euclidean space by extending the methods of vector algebra and calculus from 2D Euclidean plane and 3D spaces to higher dimensions.

A Riemannian metric (tensor) makes it possible to define several geometric notions on a Riemannian manifold, such as angle at an intersection, length of a curve, area of a surface and higher-dimensional analogues (volume, etc.), extrinsic curvature of submanifolds, and intrinsic curvature of the manifold itself. It also allows us to define “geodesic distance” on the manifold.

Geodesics are locally shortest curves. They preserve a direction on a surface and have many interesting properties. In a plane, the geodesics are straight lines. On a sphere, the geodesics are great circles (like the equator). The geodesics in a space depend on the Riemannian metric, which affects the notions of distance and acceleration. Again, metric geometry is a field by itself.

Equivalently in other areas, it can be defined as a path that a particle which is not accelerating would follow.

In Riemannian geometry, all geodesics are locally distance-minimizing paths, but the converse is not true.

[ By derivative work: Pbroks13 (talk) A geodesic triangle on the sphere. The geodesics are great circle arcs. ]

Without going into too much details on metrics and (pseudo-) Riemannian manifolds, an isometry of a manifold can be defined in simpler terms as any (smooth) mapping of that manifold (into itself, or into another manifold) that preserves the notion of distance between points.

When such a mapping is on smooth manifolds (and is a diffeomorphism: the mapping is a bijection and its inverse is differentiable), it is called isometry, and provides a notion of isomorphism (“sameness”).

Definition : A Riemannian metric on a smooth manifold M is a choice at each point \(x ∈ M\) of a positive definite inner product \(⟨, ⟩\) on \(T_{x}M\), the inner products varying smoothly with \(x\). Then \(M\) is known as a Riemannian manifold.

A (Riemannian) isometry is a local isometry that is also a diffeomorphism.

Now, that we have a basic idea about the Riemannian manifolds, let’s have a very quick look at the Laplace-Beltrami operator.

The Laplace operator is a fundamental concept in calculus, given by the divergence of the gradient of a function on Euclidean space. The laplacian of a function \(f\) at point \(p\) is the rate at which the average value of \(f\) over spheres centered at \(p\) deviates from \(f(p)\) as the radius of the sphere shrinks towards 0.

Initially introduced in the study of celestial mechanics, solutions of the equation \(Δf = 0\), now called Laplace’s equation, are the so-called harmonic functions and represent the possible gravitational fields in regions of vacuum.

Now, what is Spectral Geometry?

Spectral geometry is a field in mathematics which concerns relationships between geometric structures of manifolds and spectra of canonically defined differential operators.

Given a compact Riemannian manifold, we can associate to it the (linear unbounded) Laplace-Beltrami operator. This operator is self-adjoint and its spectrum is discrete : namely the spectrum consists of a increasing sequence of real eigenvalues with finite multiplicity.

Two closed Riemannian manifolds are said to be isospectral if the eigenvalues of their Laplace–Beltrami operator (Laplacians), counted multiplicities, coincide.

Thus, spectral geometry is the connection between the spectrum \(Spec(M; g)\) and the geometry of the manifold \((M; g)\). This fundamentally deals with two kinds of problems:

A problem that arises a lot in physics, the analysis of PDEs, probabilty etc is to compute the spectrum of Laplacian (or other operators). The main idea is to find a lower bound estimate on the eigenvalues of the spectrum on a Riemannian manifold. This is we,

Direct problems attempt to infer the behavior of the eigenvalues of a Riemannian manifold from knowledge of the geometry.

The problem we’ll look more into detail in the next post, is the inverse problem. One of fundamental problems in spectral geometry is to ask to what extent the eigenvalues determine the geometry of a given manifold.

which geometric information of the manifold can we determine from the spectrum?

Hearing the shape of a drum

This question of isospectrality (spectral alignment) in Riemannian geometry may be traced back to H. Weyl in 1911–1912 and became popularized thanks to M. Kac’s article of 1966. The famous sentence of Kac “Can one hear the shape of a drum?” refers to this type of isospectral problem.

Spoiler: The answer is “theoretically” false. There exists isospectral manifolds that are nonisometric.

In the following post we’ll formulate this problem in terms of computer vision and shape analysis, as a numerical optimisation procedure in relation with interpolation, correspondence matching and style transfer.

All rights to images are reserved by respective authors.